Just a note to all you other travel writers and bloggers out there. I have a small bone to pick with you guys. In as much as the Internet is replete with false information I have also noted that there is an abundance of misleading and omitted information. My day job, which pays my bar tab, requires me to keep accurate information. A key factor in this is the date stamp on all files, documents and printed matter. The month-day-year (or day-month-year to the Brits) is essential and always foremost in my daily routine. I see many websites that lack dates and the most disturbing omission is always the missing year. When I find information on trade shows, conferences or events, the lack of a full date confuses me (easily done) and I don't know if the event is past or up-coming. So please, all you writers out there, please ad a full date when posting something that has an expiration date.
Posted by Pale Ale Ed at 6:31 AM No comments:

I was going through some of my writing that I did as editor of the TRASH Can, for the Three Rivers Alliance of Serious Home Brewers. I found this article from June 2001 and thought it would be interesting as growlers have been around Pittsburgh for 10 years now. Has it been that long Glenn?

Headline: All Smiles at Fat Heads

A while back Fat Heads South Shore Saloon on the South Side shut down for a remodel. They have been reopened now for several weeks with an expanded beer list. Going from 20 to just-under 40 taps put a broad smile on my face. They have always been noted for serving good US microbrews and this has not changed but they now expanded the English, German and Belgium offerings. But this is not why I write.

For the first time in Pittsburgh a tavern is selling growlers. Talk about one for the road. Yes, our local brew-pubs have been doing this for a number of years but Fat Heads is the first bar that I know of that is selling draft beer to go. If you think another pubs has or is doing this too please let me know.

It has always been legal for bars to sell draft take-a-way; this is how growlers got their start. The price of the beer is the same as on draft plus the $5 cost of the growler. They bottles hold 48 oz. of beer and the cost usually works out to the price of three 16 oz. pints. The specialty beers have an adjusted price but just remember you are paying for 48 ounces of beer. They will refill the jug if you bring it back for the cost of the beer.

Even if you have just one or two favorites on tap the new happy hour should start you smiling. From 4 to 6 all drafts are half off and not just at the bar. Either in the dining rooms or the new patio everybody can be happy at happy hour. Myself I’m pretty happy at the bar just to have a chat with Amy.

The above story was first published in June 2001 so the growler prices and happy hour ar edifferent at Fat Heads now.

It was announced that East End Brewery in Pittsburgh is to bottle Old Ale. Just want is old ale and why should you drink it? Well, if contemporary drinking habits are followed it should be well received in the local bars. Old ale is an English beer term denoting a strong ale that was set aside to mature and mellow. Strong English ale is purposely made to a higher gravity with the intention to be served after a short maturation time. Maturation is the ageing of beer under controlled conditions. This allows the beer to develop various characteristics and qualities that people find more desirable over ordinary strong ale. Some strong ale may exhibit a bite from imbalance of alcohol. Old ale has been allowed to mellow out, much like the young warrior transforms to a wise old man, albeit wobbly knees and back pain. One of the reasons the beer is allowed to change condition is so it can be blended with other pale or brown ales. When set aside for this reason the beer is referred to as a stock-ale. Incidentally, when different beers are combined by a brewer or bottler it is called blending. When done during serving it is mixing.

Old ale does not have to have a high OG, although what the Brits think is high as to what we have on tap these days can open some eyes. Many English Old ales have less alcohol than the BJCP guidelines list. These ales fit in between strong ales and barley wines but the evidence of a lot of alcohol need not be overwhelming. Theakston’s Old Peculier (4.5 abw/5.6 abv) has an exciting taste yet is so mellow that is almost seems like a dark mild. Yes, the 5.6% is a bit much by UK standards but I always have a pint at The Swan in Cosmo Place, London WC1.

When strong ale is matured for a longer vatting time, preferably in oak, it is said to have gone stale. This is not a bad word. It simply means that it has been allowed to “stand” for a while. The word stale is a very old English word meaning, stand as in a stable where a horse would stand to rest. Old Ale should have expressive notes of fruit, hops and malt and should be bittersweet. To be true to style is should mature in oak for more than a year. Sadly I don’t think many American brewers are doing this. Roger Protz called one of his favorites port wine with hops (Protz, Taste of Beer, 92). Overall, the beer will be mahogany to dark ruby. Fruit should be expressed on the palate as well as a dryish hop bitterness. North Coast Brewery reflects Protz’s assertion of the port wine comparison. See what the BJCP has to say about Old Ale. This is what CAMRA has to say about Old Ale.

Other than Old Peculier (correct spelling by the way) good examples are:

Parking on the South Side

Tell me what's wrong with this picture.
And it's not the picture that's wrong. 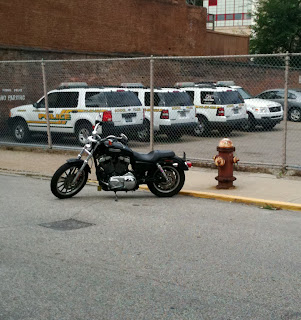