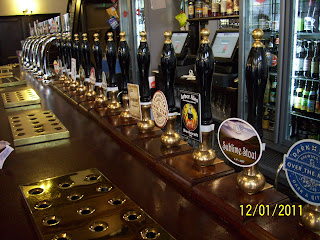 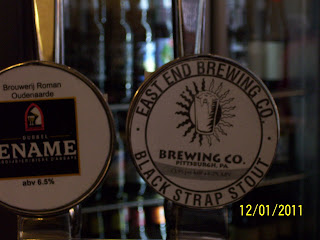 When I was in London at the beginning of December of this year, I made it a point to have a pint of beer from the East End Brewery in Pittsburgh, Pa. The oddity of this is the fact that I am from Pittsburgh and drink the beers often, as the beers coming from Scott Smith's kettles are wonderful. So why would I travel to London at considerable cost to drink a beer I get down the street? Because it was there!

When I first started my travels to the land of fish and chips and pork pies I was not yet a beer drinker. Good thing too as there was not a lot of what we would call craft beer back in the 1970’s. As I got my training in good beer at Chiodo’s Tavern in Homestead I discovered that there was more than one beer style. Unfortunately nobody told London. I was drinking porter in Pittsburgh but no bartender in London ever heard of such a drink. “Do you have any porter?” “No, he went home early today”.

Finding good beer in London is pretty easy now. The Brits are finding that they can make interesting beers and so many are finding their way to London. European beers are as popular in the UK as they are here. American beers have been firmly planted on British soil and Sierra Nevada, Rough, Victory, Southern Tier and Duck Rabbit are as easy to come by as Young’s and Fullers.

Thanks to a rotating distribution system Scott was able to send 30 combined kegs of Black Strap Stout and Big Hop IPA to England and Europe. Two pubs in London had them on and the reviews that came back were positive. A long time buddy from London had a Black Strap and found it eye opening. One chap on twitter sent Scott a tweet with the word “blimey” in his review of the IPA. When a review incorporates the word blimey in it you have arrived. To stand next to a tap in a London pub sporting a beer from Pittsburgh is one that I am happy to stand next to. I support Pittsburgh brewers and will do so 4000 miles from home.

Photos are of the Craft Beer Company on Leather Lane, Clerkenwell EC1

The question was asked recently as to why the name barrel is abbreviated as bbl. There have been a few answers and I found a few more in the Internet as well. Some are almost right but a bit off the mark and some are just pure bunk.

It is widely believed that the abbreviation of barrel is bl and the bbl for blue barrels. Both of these are bunk. Yes, there were blue barrels but at the same time there were red barrels. Barrels (also known as casks) have been around for centuries and not until recently have they been standardized. Beer and wine barrels were standardized for a number of reasons. First and foremost that coopers (barrel makers) need a way to mass produce them. Although made by hand they cut staves to a uniform length so that the barrels would hold the same quantity of material. Beer barrels were made different that ale barrels so one produce could be distinguished from the other. This is where the blue barrels debut. It was not until western Pennsylvania became the oil capital of the world that color came to be applied. As the country was involved with a civil war, the northern government needed a way to tax oil to fund the war. It took some doing and industry basically came up with the standard size of 42 gallons. Thi sisze was in use during the 1700’s. Bunk 1: Standard Oil did not standardize the barrel, the industry as a whole did. Bunk 2: The barrel was not open topped and companies would not pay for spillage. Only an idiot would ship a valuable commodity this way. Bunk 3: A 42 gallon barrel was not used to guarantee anything to a buyer. It is just what the oil producers came to agree on.

Why was the barrel painted blue? Because it was not red. When the oil was refined there were a number of products derived. One was gasoline that nobody wanted. What did you need it for? It was also dangerous. The most important commodity derived from oil in the 1800’s was kerosene. This was the money maker for oil companies. As barrels were pretty much the same size (unlike beer and ale) another way was need to tell one from the other. Hence, kerosene was in blue painted barrels and gas was in red painted barrels. Even though kerosene was the more important product all barrels were still abbreviated bbl and not rbl. As shown in the link below, the abbreviation was used before the birth of “big oil” in 1859. Any further investigation will have to involve Ben Franklin.

See: http://sites.google.com/site/petroleumhistoryresources/Home/42-gallon-oil-barrel This story also tells of the birth of the Heisman Trophy.

I have many issues with the SS NID and what they are attempting to market. They are supposed to be business owners so one would think they know how to sell. Yes, that was a purposeful dig by me. Their website is nice and green with warm and fuzzy fluff nut no real business plan. If they wish to sell me they need to answer some questions.

What do you want to do?

You want to clean sidewalks that owners are required to keep clean (by law) yet they refuse so you want my money to pay somebody else to clean it for them. Is that right? Many owners do clean their sidewalks. If you don’t like dirty walks then complain to the owners. If you take money to pay people to clean sidewalks, will everyone who pays have their walks cleaned? Will some not be? Will you keep an eye on my property at 2 AM when drunks are breaking mirrors and up-rooting plants? Who decides this?

What area does the NID propose to incorporate?

None of this is debatable. Tell me your plan and the area it encompasses. Put it on your website and facebook page and make it clear. If you want to get off to a good start (with me) do not call me a stakeholder. I am a citizen