Pittsburgh City Councilman Doug Shields has launched an attack on massage parlors in the city. They are not only illegal they are not good for the well being of a community. About the same time Mr. Shields started rubbing the parlors the wrong way, an interesting article appeared in the Post. Apparently Papa J’s restaurant in downtown Pittsburgh has adverts on their coasters that is catching more than overflowing beer. The coasters have pictures of women that encourage finger exercising. You need to read the story yourself.

From what the Post writes, it would appear that these ads are demeaning to women. It is one thing to look at a women tastefully posing in a magazine but something else all together to have holes in strategic location to insert ones fingers, followed by instructions. Not a good move on Pap’s part. The coasters may be placed on the bar and not on tables but they are a restaurant none the less and children could come to see them. What does dad say when little Jane sees the mats? For that matter, should female wait staff have to deal with comments made by customers?

Papa J’s is a good place and maker of the best white pizza around. They stopped the ad campaign, which was the smart thing to do. Bars and restaurants should be a place for enjoyment by all and not a place to cultivate lewd or offensive behavior. The coasters could just get things fermenting. It is sad that some people may think this is “sour grapes” but some things just need to remain corked.

Dan Woodske of Beaver Brewing had a Pittsburgh release of their brews yesterday at the OTB Bicycle Bar on E Carson St. On tap and in growlers were the three regulars: I Porter Ale, Camoline, and Basil. Also in growler form but in limited quantity was the excellent Kvass.

I Porter Ale is a bit of a porter with hop character found in an IPA.

Basil is an amber ale made with basil grown by Dan.

Chamomile Wheat made with Chamomile Flowers, Fuggle and Hallertau Hops. Not your typical wheat beer but very pleasant.

None of the beers are over 6% so one can have more than one should you desire a personal beer tasting.

Kvass should get Lew Bryson to town as it is well within the “session ale” range; coming in between 1% to 2% ABV. Yes, that’s right; a drinkable beer that is not 17.76% ABV. This original Russian style beer is made with baked bread, water, lemon peel and raisins with just a dash of barley and hops, too.

One thing that I noticed was the people at the bar and in the back. They were all young (over 21, of course). You could feel the exuberance as they all were drinking what we call craft beer nowadays. Between the bar crowd and the OTC Beer Club the focus was on the beer. This was not a drink fest but a bunch of young lads and lassies enjoying well-made beers. I was told that the number of club members in that evening was unexpectedly high. Probably a result in looking to see what the new kid on the block was brewing. Judging by the turnout and reception the beers received I tooks like Dan will be busy as a … No, I just can’t say it.

Most Sundays the hard copy Pittsburgh Post Gazette is thin. Not much going on in the world so no need to print a fat paper. But today's was thick and heavy. After getting to breakfast and opening it I found (as I often do) that half of it was missing. This is partially the fault of the Post as they make underpaid out-sourced workers assemble it at point of sale. What made today's different? It had 11 sets of the PG Store inserted whereas it should have had only ONE. It this the Post's way of ridding itself of unwanted paper? Oh the trees that gave their lives for sports.
The fact that the Post does a better job of reporting on beer news (thanks to Bob Batz) and has more local news, I would switch over to the Trib. But they do not print Dilbert. I will stay with the Post but look for another place to buy it. How could I change papers? I would miss how the Post crinkles the paper in production at no extra cost to me.
Posted by Pale Ale Ed at 5:31 AM No comments:

Mantini’s changed its name to the Brik Room and has reopened as of Friday, 15 April 2011 after a rebuild. Here is the link to their website, The Brik Room. Their Facebook page has been updated but it still goes by the old name of Mantini’s.

I was too tipsy yesterday to stop in but plan to soon. No telling if the old bar staff has been retained or replaced. Harry on Saturday was a good bartender. I hope they kept him as he seemed a good fit there. 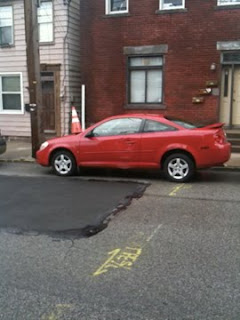 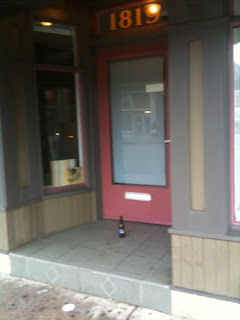 Just two reasons why South Side is a great place to live. Toys to play with at night and so many places to drop off your empty bottles.
Posted by Pale Ale Ed at 6:38 AM No comments:

I checked out Patio 10 one Saturday afternoon just before 6 so I can legally say I was there in the evening. What a pleasant time I had. With Guinness in hand I was talking to the bar manager Rae, a young lady who obviously has a grasp on customer service. One could have a nice talk in this place, as it is not ear-bleeding noisy as some other places. The décor was easy on the eyes too. I liked the space age lamps hanging over the bar that reminded me of George Jetson’s home.

Parking can be tough anywhere on the South Side and here is no exception. You can pull in off 10th Street and enter the hotel parking lot before 3 pm; just say your going to Patio 10. After 3 for is hotel guests only but you can leave any time. Parking is available at the Riverset Credit Union lot one block away at Bingham, on the left. Only after they close please; after 4:30 weekdays but 6 on Thursdays.

On a subsequent visit I had a crab cake sandwich and potato soup. The food was good and service was quick. The other bartender was nice to talk with and judging by the others at the bar nobody was leaving anytime soon. Ok, so this isn’t a review that you would read by a real food writer but head on down and give the place a try. They are tied to Nakama.

Located in the Holiday Inn Express building and where Amalfi on Tenth used to be.