Every license on the South Side other than hospital, churches or private business. Sorry about the formatting.


On December 18, 1917, all manner of manufacturing and transportation of all alcohol within the United Stats and its Territories was prohibited. Basically, national prohibition outlawed anything to do with the pleasures of drinking. But the 18th amendment of the US Constitution had no mechanism of enforcement. That is why the Volstead Act was passed on October 28, 1919. President Woodrow Wilson vetoed the act but Congress overrode the veto. The veto and override both occurred on the same day.

In as much as the Volstead Act gave the government the power to enforce the prohibition of alcohol, it also provided measures that permitted brewers to brew very low strength beer once they obtained a Federal permit. The Act also allowed citizens the right to drink full strength beer along with whiskey and wine of any kind.

A provision written in the Volstead Act specifically allowed for the consumption of alcohol in ones private home provided the alcohol was in place prior to February 2, 1920. Prior to that date the sale of booze was legal and those that were able to could buy as much as they could afford. They had to keep it in their homes and could not sell it. Guests in the homes were allowed to drink but could not buy a bottle for take away.

In a sense, the government actually permitted legal speakeasies. Although no money could change hands what savvy homeowner could not have a “birthday party” every so often but require “guests” to contribute a cash donation for the all you can eat “buffet’?

Twenty-First Amendment of the United States Constitution
Although the 21st amendment was pass in February, it was not ratified until December. Congress took steps in March of 1933 to revise the Volstead Act to allow for the legal production of beer (not wines or spirits). Prior to the repeal of prohibition in 1933, the Volstead Act was revised to permit the manufacture of beer having not more than 3.2% alcohol.

The Volstead Act defined intoxicating liquor as any beverage having 0.05% alcohol. This superseded all other prohibition laws enacted by other states. Enforcement officially began on February 2, 1920.

For more on drinking laws during the 18th century, please see the Brooks Law on the Pittsburgh Brewers website.
Posted by Pale Ale Ed at 5:09 AM No comments:

A delightful beer tasting took place last evening at the Rivers Club in Oxford Center. But unlike most tasting where the local or regional breweries have their beers on tap, this event was made up entirely of home brewers and the beer they made in their kitchens or basements. Well, Full Pint Brewery was the lone local brewer as well as South Hills Brewing Supply. All in all there were eight home brewers offering some exciting and different beers not usually found in your local pub.

I was a member of the Three Rivers Alliance of Serious Homebrewers since the founding in the early 1980’s (yes, I’m that old) and have seen the interest in home brewing grow over the years. Many home brewers brew beer that can compete with the professionals and it was evident last night.

Mark Minuto took first place in the voting with his Agave Wheat Ale. Made with the juice he obtained at Whole Foods, the drink was absolutely splendid: very clean and refreshing. One that I particularly enjoyed was Dom Tomino’s Cucumber Wheat. Very much like Mr. Minnuto’s this as well clean and refreshing. The cucumber taste was very present but delicate. Dom took the time to remove the outer skin to avoid giving the beer any bitterness. Both of these beers are in my “This is just a nice beer” category. Despite being a beer tasting, Terry Sasala brought an English Cider. From my exhaustive study ciders in England I have to say that the Queen would be pleased. Low in alcohol as most are, one would be able to enjoy several pints during the World Cup.

Still, for something different, Bob Bero brought his homemade B-Hoppy hard candy. He uses the hops after they are removed from the boil to make three types. Each of the three candies has a different type hop: Golden, Cascade and Saaz. The “anchor” brewer at the tasting was Full Pint with their Nut Brown Ale. This is not your father’s New Castle as it had a bit of smoky taste given it from the use of Rauch malt. Certainly not a Rauchbeir it had a delicate taste but your buds told you this was something different. This was a very well rounded menu of brews.

This was the first Hoptoberfest at the Rivers Club and everyone hopes it will not be the last. The young professionals who were in attendance were sparse enough that everyone had plenty of time to chat with the brewers and one another. This was more of a meet-up and by far it was not a drink fest. Myself, I got to see some old friends that I have not seen in years making this somewhat of a reunion for me. This was a Rivers Club member’s only event (I was invited) but I would like to see it open to the public on a limited scale next year. Let’s keep our fingers crossed. Finally, cheers to all the brewers as they dedicated their time and home brew for this.

Of these, Iron City is inactive and Grist House was still pending. In doing a search on July 18, 2013 I found it interesting that only two breweries actually had a brewpub license: Draai Laag and Grist House. I would like to think the LCB database is up to date but they still have the late Tom Pastorius as a member of Penn Brewery.

Actually, the Allegheny Brewery & Pub is still in business but took on the name Penn Brewery way back in the 1990’s. They are the only venue to change their name.

Milkman never started brewing and as of this date they have not received a license from the state.
To look up a license, see: http://www.lcbapps.lcb.state.pa.us/webapp/Agency/SearchCenter/PublicLicenseeSearchStart.asp
I am sure that somebody may find a mistake on my part and will let me know. Please, keep the four letter words to a minimum.
Posted by Pale Ale Ed at 5:00 AM No comments: 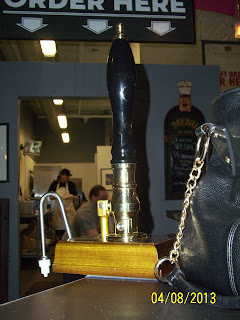